A lack of a strong sense of self or struggling with identity issues has led to anxiety and insecurity for myself and many that are struggling with their own identity. As someone with a history of a variety of identity issues — sexual preference, general life direction, codependency – I can attest to the ongoing and crippling anxiety. And, left to go on too long without help, I can also attest to struggles with depression.

I’ve known that I was bisexual for a long time, but it has taken a while to come to the forefront of my reality, and my identity. Despite my attraction to multiple genders, it didn’t cross my mind in high school that I was bisexual. The idea of sexual orientation wasn’t as widely or openly discussed then. Social media, and really the internet in general, weren’t mainstream. It wasn’t until I went to college that I really started to understand and accept this part of me.

The LGBTQ+ community has made amazing strides (though no doubt, there’s still a long way to go). However, despite these gains and positive changes, bisexuality continues to be one part of the spectrum that still needs a lot of work. Bisexuals are still often met with confusion, biphobia, and even scorned by what is supposed to be their community.

For someone already struggling with self-acceptance and being unsure how to connect with like-minded people, it’s intimidating to be met with biphobia especially by those who understand discrimination all too well. There are a number of things I’ve either been told or read on a regular basis such as “bisexuality isn’t real” or “it’s a phase.”

These are things that bisexuals hear on a regular basis. I do fully think sexuality is a spectrum and there are many who agree. A lot of people experiment and they may still consider themselves as straight. However, bisexuals don’t need science or the approval of others to prove they exist.

Through a combination of serial monogamous heterosexual relationships, I never pursued or rather I didn’t know how to pursue a relationship with a woman. The longer this went on and the older I got, the more insecure I became. I was great at getting a guy’s attention, but how the hell do I get a woman’s attention?

There is also a huge aspect of biphobia within the LGBTQ+ community. Lesbians often downright refuse to consider going out with a bisexual woman as they think you’re just using them for an experiment, will cheat on them with a man, or that it’s just a phase. For many years I did actively choose only heterosexual relationships, on the occasions I did try to pursue relationships with women, I was met with these ‘reasons’ or issues on a regular basis.

Even though I was outwardly embodying heterosexuality in my relationships, I’ve never wavered on my attraction and thoughts towards women. This lack of experience has caused me a great deal of anxiety, confusion, and feelings of exclusion.

I’ve always wanted to attend Pride, but do I show up with my cis, straight boyfriend? Do I then just look like an ally? Do I need to wear a huge sign saying, “No, I swear. I’m bi.”

I’ve always wanted to “come out” officially, but it terrifies me. Will my family disown me? Or worse, will they downplay and dismiss it? Is being out officially going to open me up to more biphobia and accusations of being confused or going through a phase?

Over the past few years, I’ve told more and more people that I’m bi. It feels empowering to make that claim but deep down, I still feel like a fraud.

There are a number of ways that those who identify as bisexual can be more forward-facing with our identity. If you’re not bisexual, there are still ways you can help be an ally.

#StillBisexual – if you feel comfortable, utilize this movement on social media. This was created to affirm that bisexual people are bisexual regardless of their relationship status.

Educate yourself – A study showed that bisexual women are more likely to be seen in a negative light than other women. Not only is this not fair, but now it somehow becomes the responsibility of the bi women to educate everyone else. So, if you want to be a great ally, consider doing some research and realize that bisexuals are not more promiscuous, are not more likely to cheat, and are not just confused.

More inclusion – The B in LGBTQ+ stands for bisexuality. But, at times, it definitely doesn’t feel that way. While bisexuality is getting more limelight in the entertainment industry, we still don’t feel as though we belong in the straight or gay community. Studies have shown that bisexuals have higher rates of anxiety, depression, and even suicidal tendencies than straight or gay people.

Use your voice – Some of this will come with more visibility. So if you’re comfortable being more outspoken about your bisexuality, use your voice. The louder it is, the more “normal” it is perceived, the more accepted it will become. However, again, this can’t fully fall on bisexuals to fix.

Attend Pride. I know I said that I’m nervous about it as well. But, attend Pride. You have every right to be there just as much as anyone else. Be proud of who you are and start breaking those bi stereotypes and misconceptions.

Seek help or guidance. If feelings of anxiety and depression persist, make sure to reach out to a mental health professional. If you want some guidance or to talk to someone that understands, there are more of us out there than you think. I think bisexuals tend to stay out of the limelight due to these issues, but we make a large amount of the LGBTQ+ community. The Bisexual Resource Center (BRC) has plenty of resources and you can find a Bi group near you. 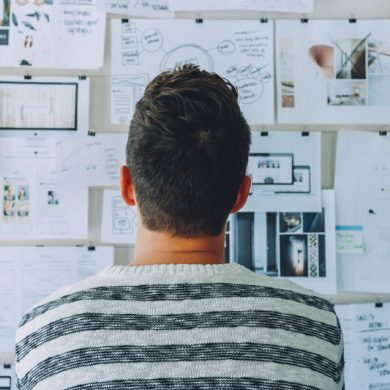