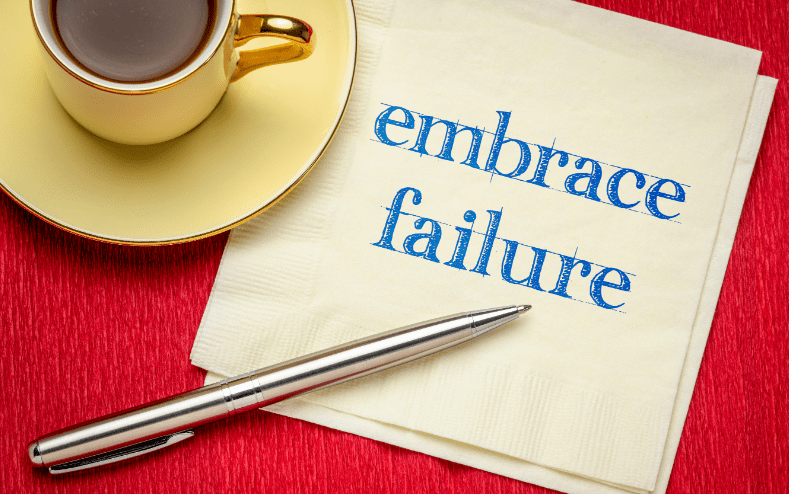 Sept 2022 Issue | Talking About Failure Can Make You More Successful

Our brains are hardwired to hate failure. Studies indicate that we process social rejection similarly to physical pain. But failure is not only inevitable, it’s necessary. The right amount of failure has been shown to optimize learning and several psychologists (most notably Carol Dweck) speak to the benefits of seeing failure as an opportunity for growth.

Dweck conducted various studies comparing what she called a “growth mindset” to a “fixed mindset.” The qualities of a growth mindset include a passion for challenge, a belief that intelligence can be developed, and an inclination towards believing failure is a part of success. Meanwhile, a fixed mindset makes us believe that setbacks are permanent, intelligence and skills are predetermined, and that failure is a sign of inferiority.

In Dweck’s studies, those with a growth mindset did better at all stages in life. From pre-school to MBA programs and beyond, people who approached failures as stepping stones to success were able to overcome challenges with more ease.

If you believe you might have a fixed mindset, don’t worry. Dweck concluded that mindsets could change over our lifetime and that we can intentionally develop a growth mindset.

So how do we take a natural aversion to failure and turn it into an advantage? The first step is talking about it openly.

Owning up to failure helps you grow

You can’t learn from an experience without acknowledging it. Getting comfortable with failure helps you look it in the face. As 7-figure entrepreneur Shannon Monson says, “We need more ownership, not perfection.”

I’m a big fan of Shannon’s podcast, called CEO School, where she interviews entrepreneurs who have made it to the top 2% of women founders whose businesses have broken $1 million in revenue. Nearly every person on the show has a story of undeniable failure. Businesses that shut down, angry clients, painful moments of self-doubt. They can also articulate precisely what that failure taught them and how it influenced their success.

In episode 33, Shannon shares her worst mistakes of 2020. What struck me about this episode is that she doesn’t talk about failures from her youth. These aren’t 5 or 10-year-old stories that time has hardened. These are fresh wounds and recent realizations.

When I DM’d her to ask why she shared her story, she said:

“I think people are so afraid if they admit to a mistake everything falls apart. But it’s not true. The only thing that changed by me sharing was helping someone else avoid the same mistakes.”

Sharing failures means others can learn from our success

Success is a collective activity. In today’s collaborative work environment, it’s increasingly rare to find “superstars” that do it all on their own. Most people work in teams where tasks are delegated. Sharing failures in this type of set up is crucial. The more your team knows as a collective, the better off everyone will be.

When I first hired a contractor for my business, I was surprised that she wanted to know all the stories of everything that had failed. When I dug into it, it made sense. If I only talked about success, she wouldn’t have much room to innovate. As is typical for younger generations, she didn’t want to be micromanaged or told, “Do this and only this.”

What she did want, was to know what hadn’t worked, so she could analyze it and avoid repeating the same mistakes. The more details she had on the failures, the more she was able to piece together a direction for success.

How to talk about failure without making yourself look bad

Whether you’re starting your own business or pursuing a career, it’s vital to know how to talk about failure. The famous question, “What is your greatest weakness” still stumps interviewees year after year. Likewise, “Tell me about a time when you failed” would send most people into a spiral.

Here’s how to talk about your failures in a way that puts you in a good light.

Everyone experiences factors that are outside of their control. Unclear directions, a tough client, or an uncooperative team member. Taking ownership shows the person you’re talking to that you’re prepared to face future challenges, rather than hide behind variables that you don’t have control over.

Frame it as a reflection

Failure stories don’t have to end in disaster. Think about a time that you applied what you learned from that failure. Framing the story as a reflection shows that you’ve grown from the experience.

When a project flops, ask yourself two questions:

The goal here isn’t to be hard on yourself, but rather to empower you to see areas of improvement.

Be humble and open to feedback

You don’t have to have all the answers! Ending your failure story with a phrase like, “I’d love to hear your thoughts on what I could have done better” is likely to get some fantastic responses. When you put yourself in a vulnerable position, most people will offer their best tips and advice (if they don’t, you might not want to work with them anyway!).

How many times did you fall before you finally learned to walk? The number is probably pretty high! Can you imagine if you stopped trying after the first time? Or the 10th time? Or the 100th time?

Failures feel intense in the moment, and it’s grueling when you feel like you can’t catch a break. But decades from now, you’ll thank yourself for pushing through. Normalizing failure and talking about it in a productive way can help you and those around you keep moving towards success.

Relationships – Get tips on ways to grow and improve your relationships.